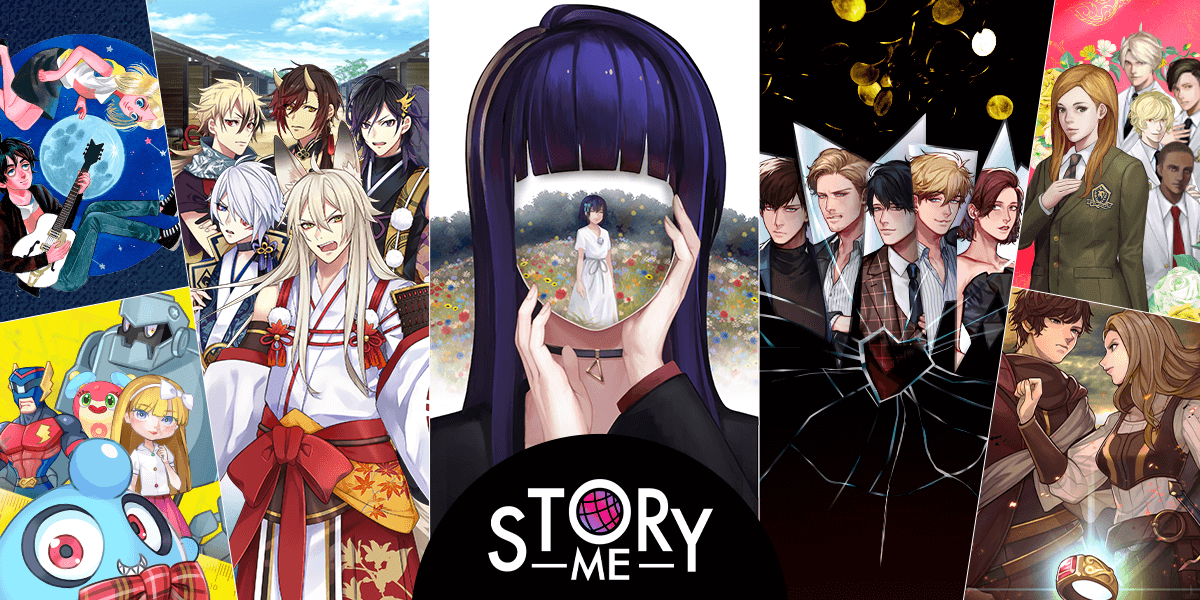 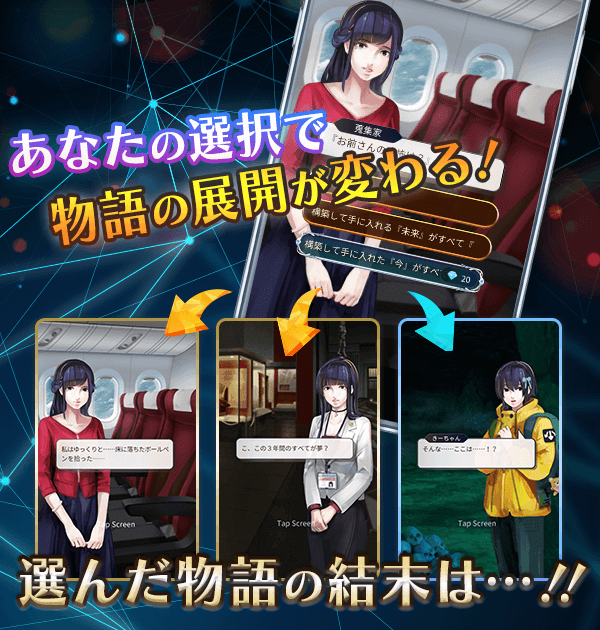 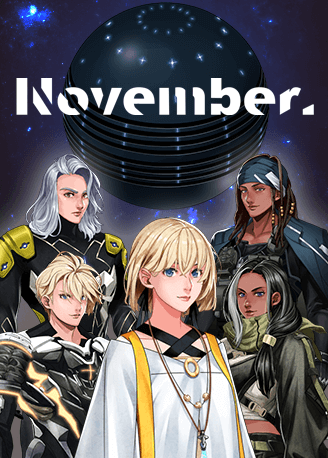 November.
――Non vem ber―― These were the mysterious words that a little girl who has never been “outside”, heard in her dreams. The next day, the doctor tells her that “she will be going outside of the facility. However, the “Outside World” that she was thrown into was a high-rise area that had gone to ruin… Why was the little girl sent “Outside”? Exactly “where” is this world that has turned into “ruin”? And what do the words she heard in the dream mean? As she is tossed around between the people who want to protect her and the people who want to take her away, the little girl begins to learn to stand on her own two feet. 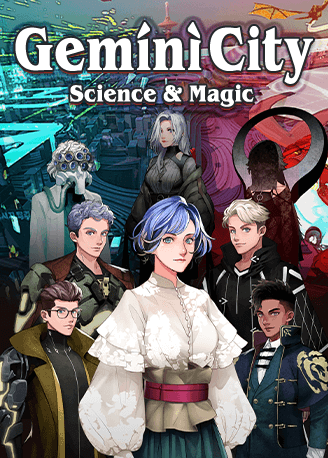 Gemini City
“In a world where two people from different countries who weren’t supposed to meet, end up falling in love”. “Sphere” a country of mystical powers and magic, and “Circuit” a country full of technology and gadgets that feel out of this world. These two countries make up the island that people call Gemini City, where they are at conflict and in constant competition with each other. Inside Sphere, technology from Circuit is forbidden, and inside Circuit, magic from Sphere is forbidden. Going across to the opposite country is a dangerous task…. But You, who are looking for your best friend that has disappeared, cross the border and dive into the unknown world! During your adventures, what awaits you are witches, humungous plants, a mad scientist…. And a lover from the other country. Two people who were not supposed to meet. Your choices change your destiny ―. This is a spin-off story inspired by “DUO-WARRIOR” by Henry Gilroy, the writer of the Emmy award winning TV animation series “Star W 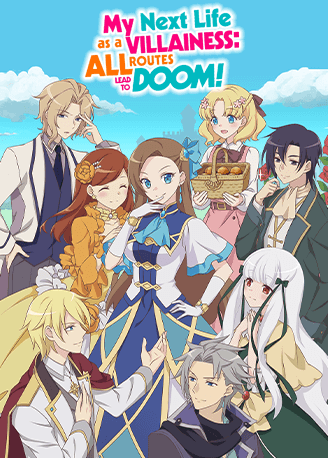 My Next Life as a Villainess: All Routes Lead to Doom!
A game that’s much more than just following the story of the the TV anime! What if Catrina had taken a different route? Is Catrina able to avoid destruction and reach happiness? Everything is up to you! Enjoy creating the path of Catrina’s fate! 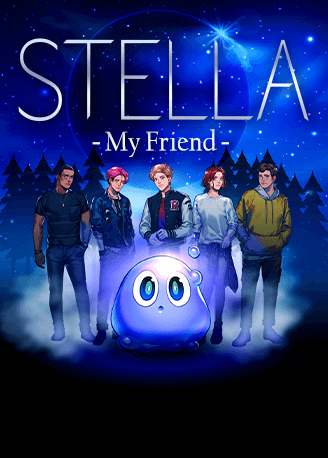 Stella -my friend-
A free-forming cute little body crying "Kyuu! Kyuu!" This is the story of your encounter with "Stella"... on the day of your friend's funeral. You choose to keep Stella as a memento, not knowing that this triggers your days being chased by a group of adults. Why are they chasing Stella? What is Stella? And why did my friend die...? The 'truth' will bring you the largest shock and warmth you'll ever find. With the power of your four best friends, can you protect Stella? An unexpecting youth story, with an unidentified creature... 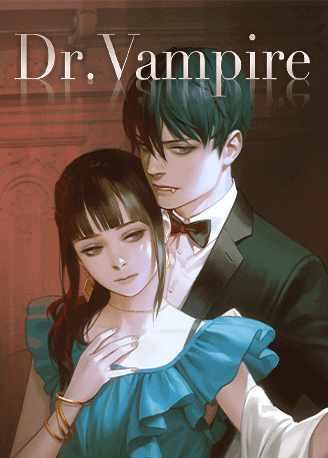 Dr.Vampire
The protagonist, who lost her mother when she was a child, became a detective to investigate the identity of her mother’s killer. While looking into a different case, she gets herself into trouble, and is saved by a vampire called Doctor Al. In exchange for her blood, Al helps her search for the criminal who killed her mother. However… every time Al sucks her blood, “Al’s past” attacks her, sensually. But to reach the truth, she must give up her own blood. Can you reach a happy conclusion, or will it be… 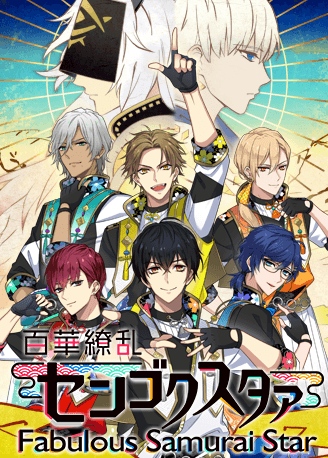 Fabulous Samurai Star
Just before their long-awaited major label debut, the idol Ridori-Troy is caught in a car accident. When they wakes up, they finds themselves in a different world like the Warring States Period, where idols are militant. In order to return to their original world, they have to meet the ruler of the other world, the "Tenka-bito". In order to do so, the boys have to participate in a contest to determine the number one idol, but this is the beginning of hardship. 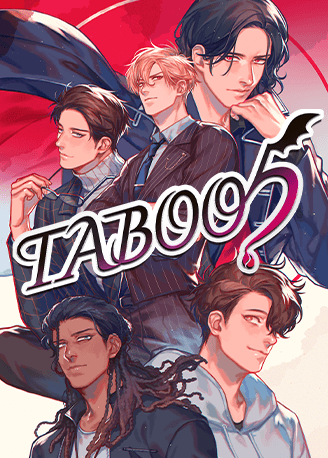 TABOO 5 ~The forbidden fruit merges sweet~
You are a female university student living in the suburbs. Returning from school, a man suddenly attacks you in a dark street. You feel the fangs pierce your neck as well as…pleasure. From that night you become his servant. The fate of story comes to life with the encounter of 5 men. See for yourself, the shape of love beyond the taboo... 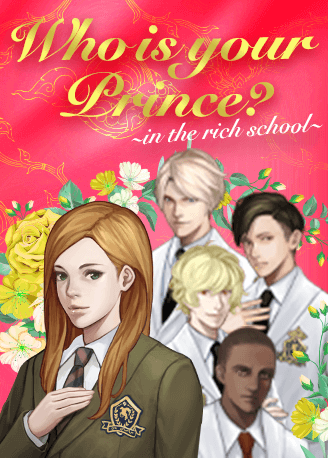 Who is your prince?
A girl enters school full of celebrities and hopes for a bright and glamorous school life. This quickly falls apart due to the collapse of her father’s business. “I will crush society’s ranking system!” After falling from celebrity status to the daughter of a hotdog stand owner, the heroine fights for her dignity against the “S Rank” ones ruling over the school. 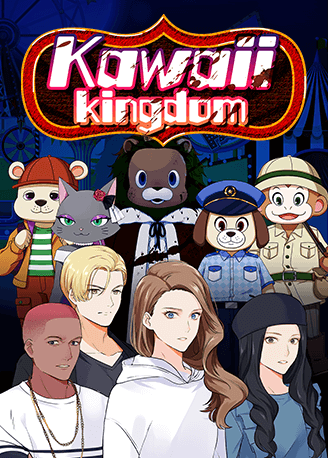 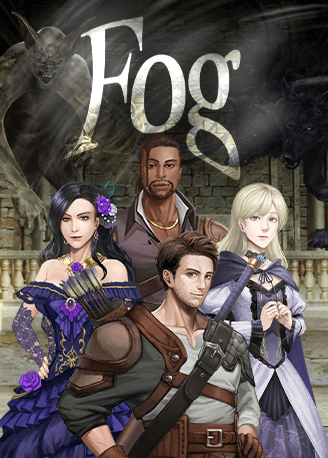 Fog
There is a forest that is said to be unescapable when a mist hangs over it. Though you stray into that forest, you are fortunate to find refuge in a mansion. The owner of the mansion is a beautiful yet bewitched woman, and she saves your life. You are relieved, but it only lasts a moment. The owner’s daughter tells you her mother’s true character and what she is scheming. 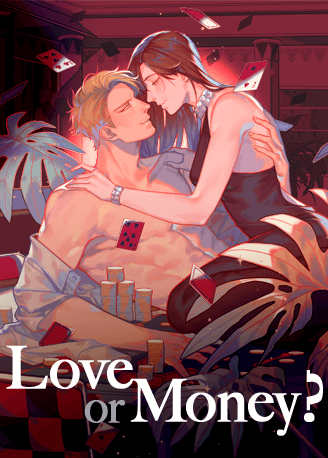 Love or Money?
“You have 3 years to find a partner, or else you’re coming back home.” That’s the deal a still single girl makes with her parents when she left the small town. With a shred of hope she enters into a matchmaking party on a luxurious cruise. Little does she know that surviving means finding a partner to avoid an enormous debt. Suspense surrounded by lies, money and love. Who will be your choice? 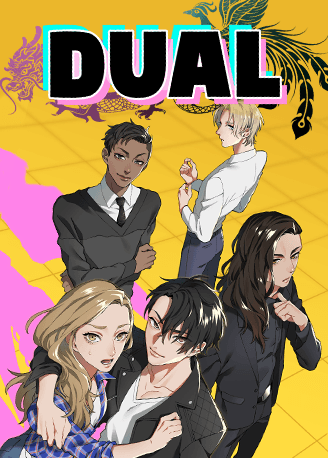 DUAL
A girl, who is an honest and sincere high schooler goes to a live music club with her best friend before their graduation. There, she meets Lon, a famous rock star from the Dragon Clan. He lives only for transient pleasures and seems to do naught but annoy her, but in the end his charms are irresistible... What kind of fate awaits these two? Come, and ride a roller coaster of a romance!

inside the toy
You wake up one day, only realizing to have been turned into a toy. In an attempt to reunite with your orphaned younger sister you go all out to become human once again. However, along the way you come across an unexpected figure… 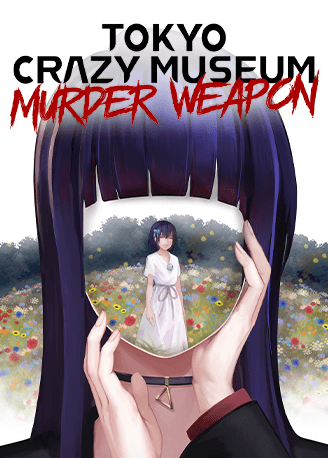 Tokyo Crazy Museum
A rare illness called “The faceless” causes the faces of people to become unrecognizable. Diagnosed with this illness, the main character arrives at the “Tokyo Crazy Museum” in search of a cure. When hearing about mysterious stories of the 6 mighty weapons, the secret of the museum is revealed. A peculiar storyline blended with suspenseful horror. 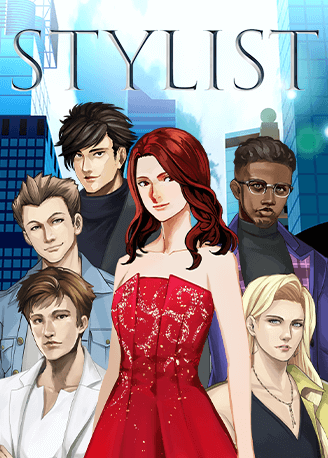 STYLIST
Dreaming of becoming a stylist, a girl leaves town and makes her way to NY. Meeting 5 men, (a famous actor, a gay stylist, a millionaire, a co-worker and a childhood friend) she enjoys her life whilst chasing her dream. Everything was fine until a rival female steps in…Can you achieve your dream? Which man will you choose? A purely exhilarating love story. 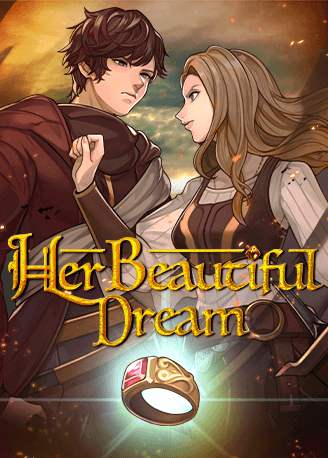 Her Beautiful Dream
In a world of everlasting strife, the Princess, next heir to the throne was kidnapped. In the attempt to return to her homeland with a cool-headed mercenary, they come across something… extraordinary. Can she discover the truth of this world; with the powerful magic that she has inherited? This is an epic story of love and determination… …that “you” must make.

BLUE MOON
The music loving heroine that lives by the rule of “not performing in front of others” meets a ghost who has lost her memory. During the search the ghost falls in love with him and eventually finds out the truth of her own death. “Words” are collected throughout the story. For the final performance you will choose which words to use for your song. What do you want to convey? To who? Your words change the ending! A youth love story. 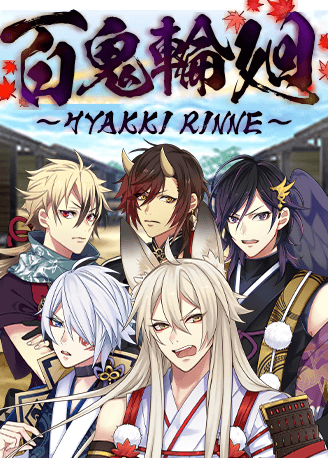 Hyakki Rinne
In the era of great wars betweenYokai (Monster) and Onmyoji (Exorcist), you are named to become the lord of all Yokai. For the Yokai followers, you devote all your powers to the battle, but it’s a matter of time until you realize your special feelings towards a few... 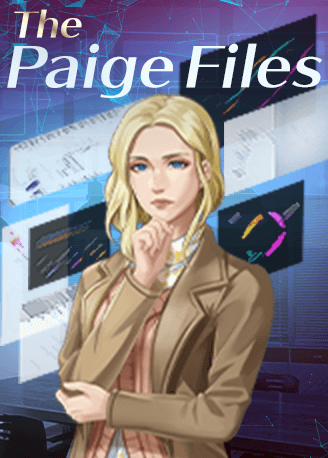 The Paige Files
A rookie cop has been taken off the case of her friend's murder. In order to solve the mystery, she joins forces with an investigator…an AI. By solving the puzzles with the investigator she discovers the origin and reason of the AI’s creation. Will you be able to select the path that leads to the truth? A Sci-Fi mystery filled with suspense. 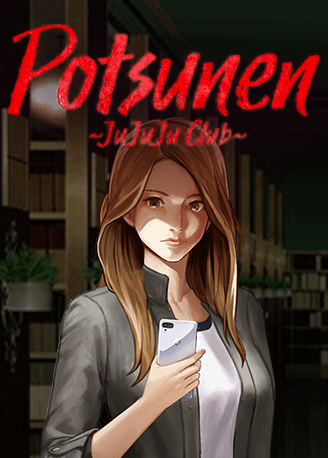 JuJuJu Club ~Potsunen~
Just another mundane day at school, except when all of a sudden a mysterious power begins to tear off the faces of the students. What is pasted in place of them are the faces of other students which cause them to go mad and shoutout “LIKE” and “SHARE”. That is the curse of the school. Can you solve the mystery behind the curse and escape from it? A panic horror story. 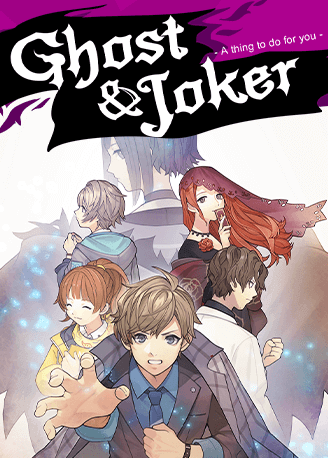 Ghost and Joker -A thing to do for you-
"One day you wake up as a ghost… the “Joker”. A girl dressed in black, a “Grim reaper,” says you “Must help those who are living”, if you want to regain your missing body and your lost memory. You are approaching extinction, mysteries are arising everywhere, the living are suffering… Can you resurrect yourself and reach the truth of this story? A mystery that will have you guessing until the end, now begins. "
Adding new novels one after another